My birthday gift from Becky this year was a 7-day Alaskan cruise! She’s pretty awesome, she is. We flew to Vancouver and found our ship:

This was Becky’s first-ever cruise, and only my second. We spent some time getting used to being on board a floating skyscraper, and watching the scenery drift by.

Our first port of call was Ketchikan, where it was raining just like home. We took in the sights. 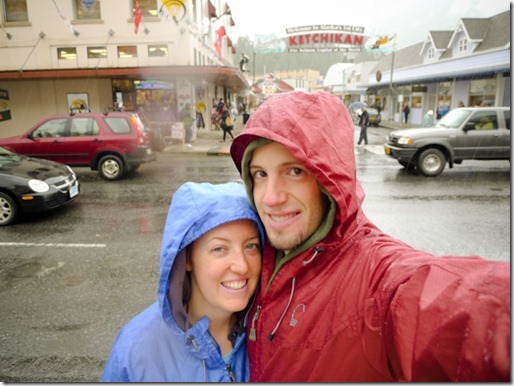 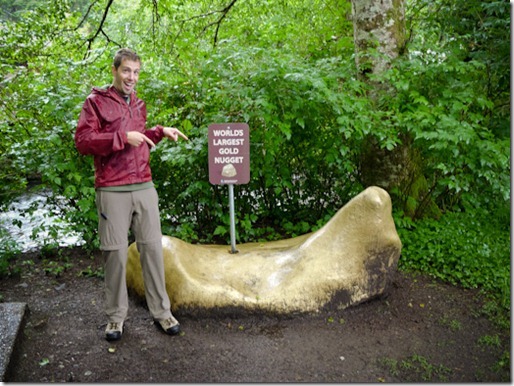 And tried to hike out of the shopping-mall district where the cruise ships dock. This is a serious problem for travelers such as we – it’s hard to get a feel for what a place is actually like when the company that got you there wants you to stay close to the dock and buy charm bracelets.

This was taken on Hoonah, our favorite stop. It’s hard to see in the photo, but that’s a humpback whale surfacing just 50 yards offshore.

No part of this place is owned by the cruise companies, it’s property of the Huna Tlingit people. And it’s the most authentic experience we had the whole trip. Part of the island is a nature preserve with hiking trails.

Our meals on board were free (or already paid for, at least), so we frequently skipped the unknown food on shore and jumped back on board for the generally-decent buffet. 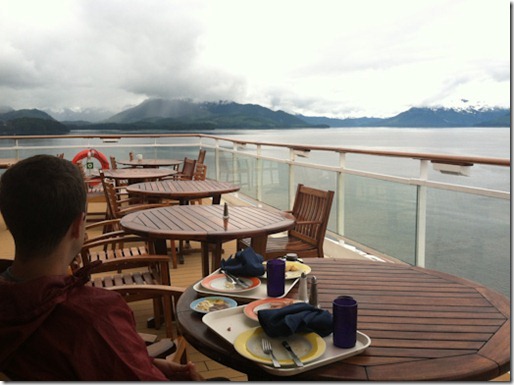 Back on shore, we awaited the landmark experience: the mile-long zipline! 90 full seconds of flight. We also took an 8-mile guided bike tour through the town, dropped in on the tribal artists making totem poles, and learned that the 4 months of tourist dollars kept the tribe afloat for the entire rest of the year. This is the one place we didn’t mind spending money, since it seemed like it was going to people that really needed it. 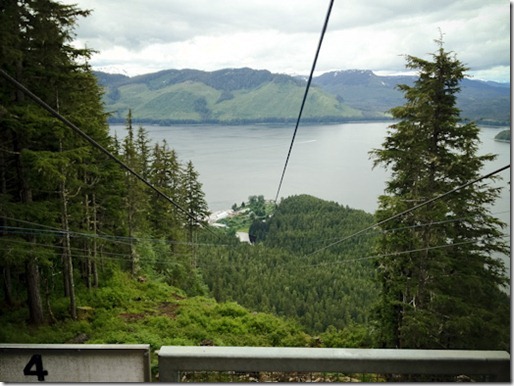 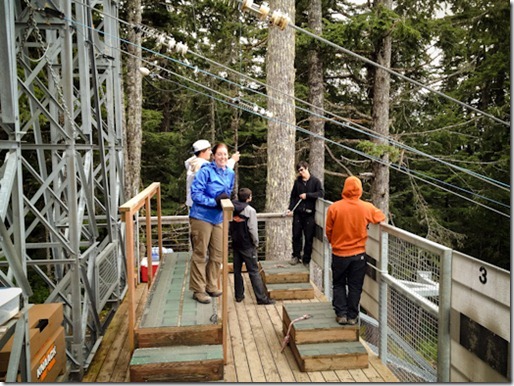 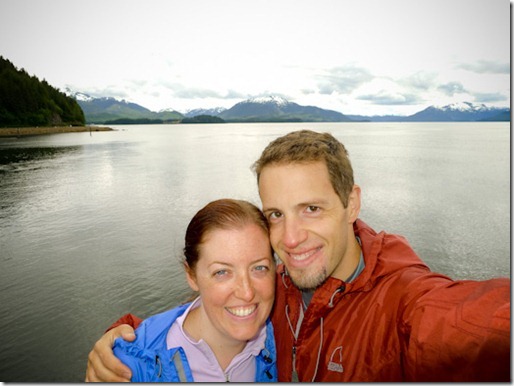 Juneau, the state capital, is about the size of  Oregon City. It’s completely inaccessible by car – everyone and everything arrives and leaves by boat or airplane. 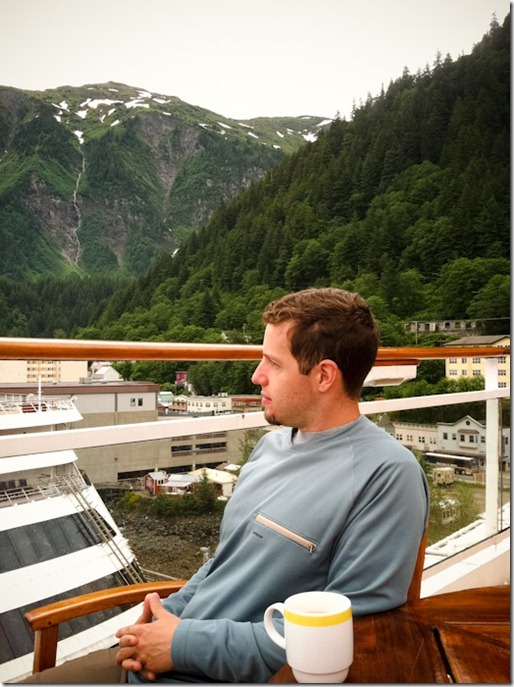 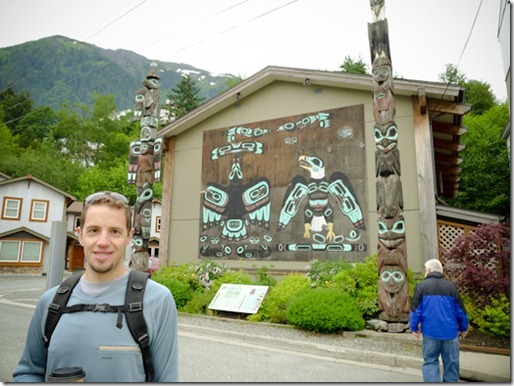 And it’s where we boarded a helicopter for another adventure. We flew halfway up the Herbert Glacier and met a dog sled team that would take us on a little ride! 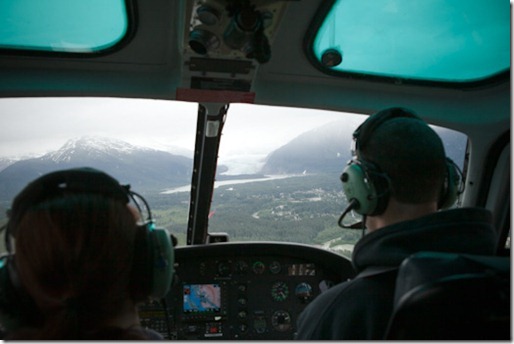 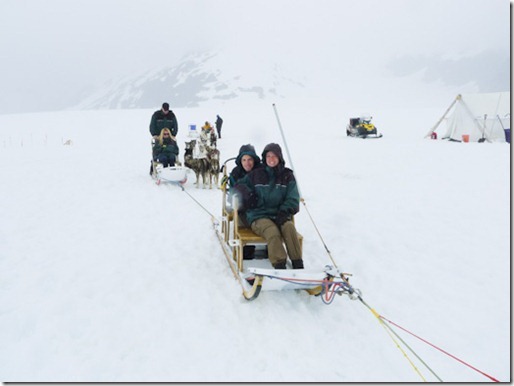 The dogs were really sweet. Becky made some new friends! 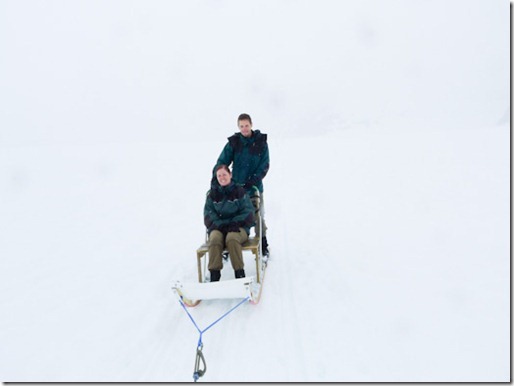 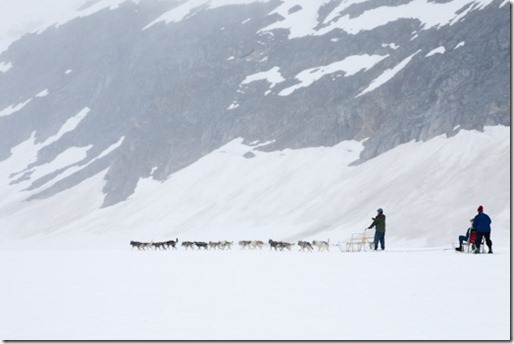 That adventure finished around lunchtime, and we weren’t tired yet. So we climbed a mountain to get a different view of our ship. 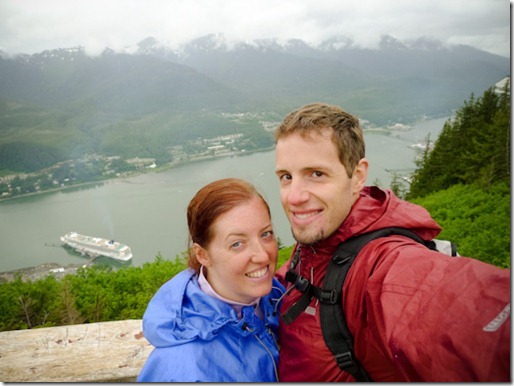 …and some wildlife. We’re still not exactly sure what these were, but they were cute. 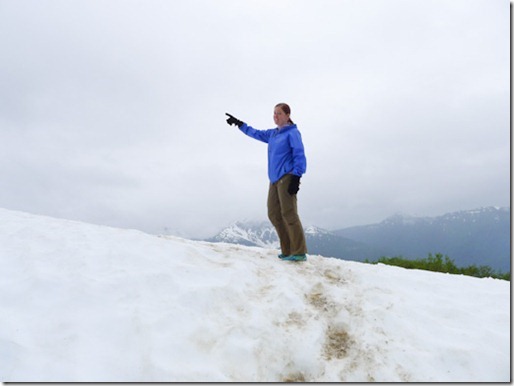 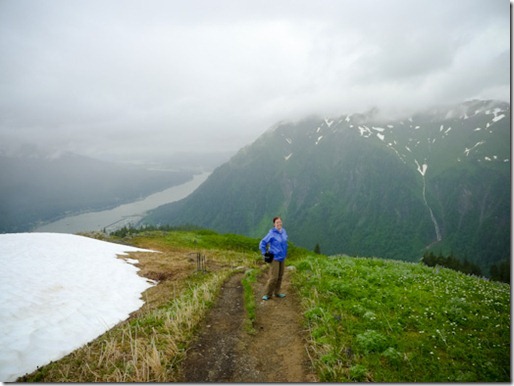 We can never get enough adventure. For our stop at Skagway, we walked into a tours hut and picked the first thing that looked interesting. That was booked. So we ended up on a “sea kayak tour”, which it turns out is a euphemism for “terrifyingly rough high-speed Zodiac ride on 10-foot swells that are freezing cold.” It was a ton of fun.

Then we hiked around Skagway, which these days is about as fake-kitschy as they come. It’s possible that nobody lives here when tourist season is over.

Here’s a gander at our room. It’s not much bigger than the double-size bed, and it doesn’t have any windows (which meant Becky was perpetually on a Dramamine regimen), but it was home.

On our last day aboard, we passed by the Hubbard Glacier. The captain was daring enough to bring us within a mile of the calving glacier face, and more than once the ship was rocked by waves from the falling of new icebergs.

On a cruise, you have an assigned time and table for dinner every night. You don’t have to show up, but if you do, you’ll at least be talking to the same people. Here’s our table; from our experiences with open-seating breakfasts and lunches, we ended up with probably the best companions possible – the only other 30-something couple (Mike & Renee, with whom we spent about half of our waking hours; you may recognize them from several of the other photos), and the uncle of the cruise director. 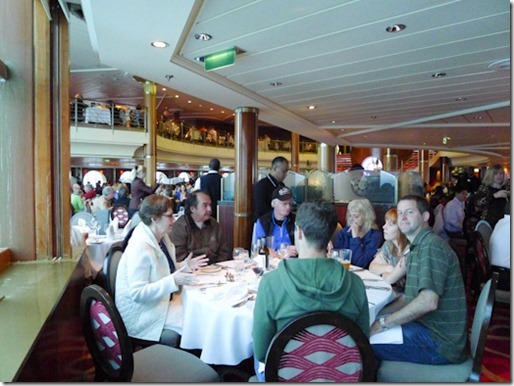 It was a fun and interesting trip. We learned that cruising probably isn’t for us, but we definitely had some unforgettable experiences.

3 thoughts on “Alaska in July”