Since GitHub is so distributed (roughly ⅔ of us work from somewhere that isn’t San Francisco), we take extra care to make sure we know each other. Every six months, we hold a summit, where everyone gathers in one place for a week of face time.

For the January 2013 summit, I was alone for the first couple of days. Here’s what I sent to Becky to let her know I had landed safely: 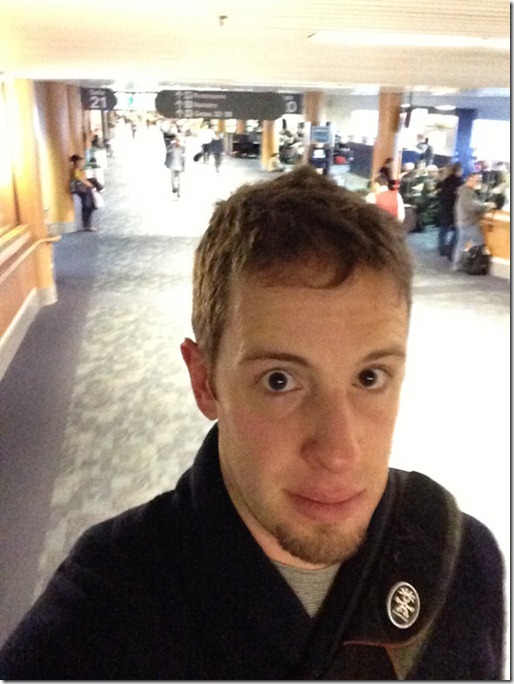 And here’s what it looked like when I reached GitHub HQ. I have a new T-shirt and I’m talking to my nerd friends, so my grin is huge.

That was Sunday afternoon. The next day was the first day of organized activities, and the whole company trucked to this awesome place, which is kind of like a playground for making industrial art. After lunch, we all contributed to a group project that will eventually hang in the office, and then got to learn something just for fun. 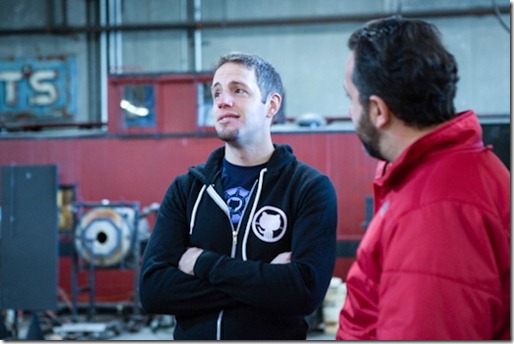 My main project was a fused-glass mosaic tile. No blood was shed in the making of this photo.

Afterward, I tried my hand at oxyacetylene cutting and arc welding, which means I got to wear a very stylish coat. 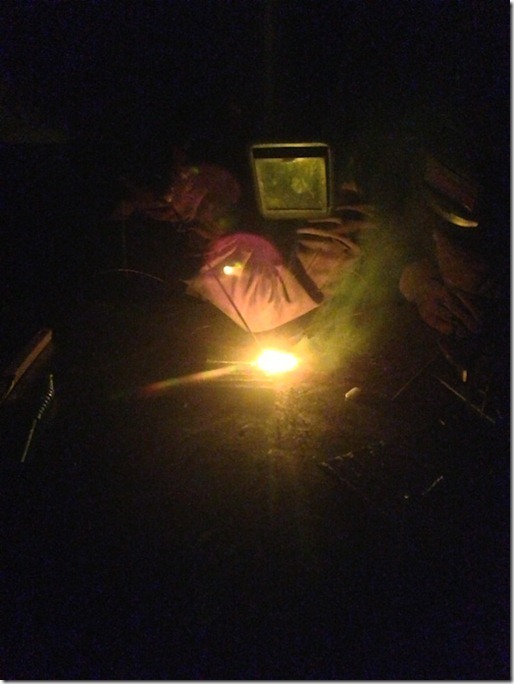 Here’s the end result of all that. It’s pretty hideous, and Becky and I both agreed it didn’t really fit into our home decor. It might still be at GitHub HQ, I’m not sure.

That night the company took over a a great restaurant named Zero Zero. We ate, drank, and made merriment until late in the night.

Day 2 was full of presentations and talking, and the exchange of secrets regarding which I am sworn to silence. So there aren’t many photos, except from the beginning of the day.

Day 3 was full of more meetings, but Becky arrived just in time for a tour of our under-construction office space.

… and a fancy dinner at Bluxome Street Winery, where vast quantities of food and wine were consumed, to great effect. 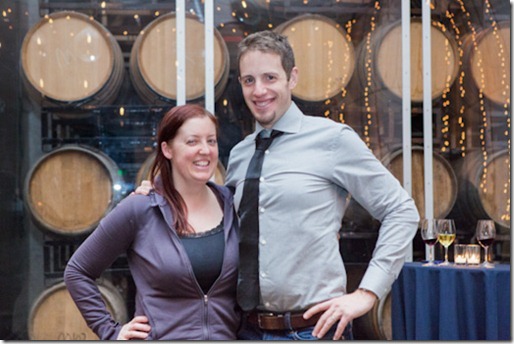 Day 4 of the summit was designated “hack day;” the idea was to work on something cool that you don’t normally work on. Here’s what that looked like:

Not much to look at, I know. Here’s lunch: 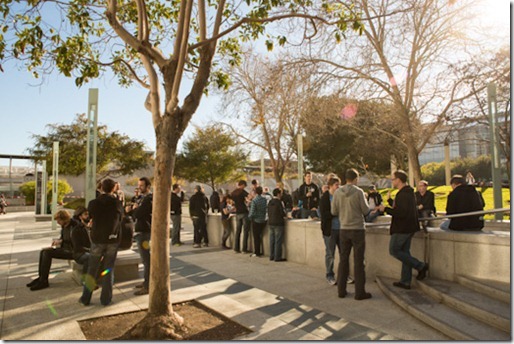 *Yawn*. How about a twilight photo from my photographer wife?

That’s more like it. And an open-bar party at an awesome techno club, with all GitHub DJs? Yup, that happened too. 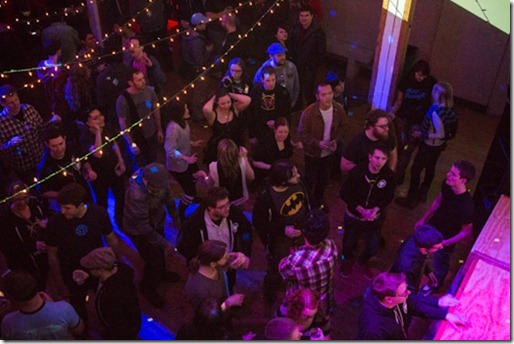 The next morning was hard to look straight in the eye, but we managed.

My friend Steven! (his name has punctuation in it, deal with it), who is a world-class competition barista, gave a class on pulling espresso shots. Mine were pretty terrible. 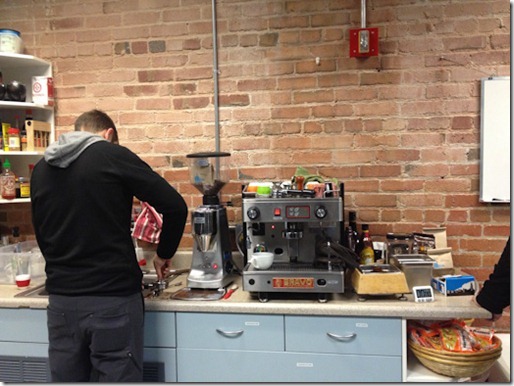 Our activity for the day was a scavenger hunt! In typical GitHub style, this one involved plenty of drinking, men in drag, and general inappropriateness. We all got to know San Francisco (and each other) a little better in the process. 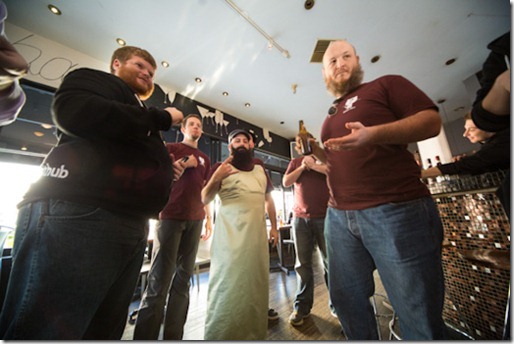 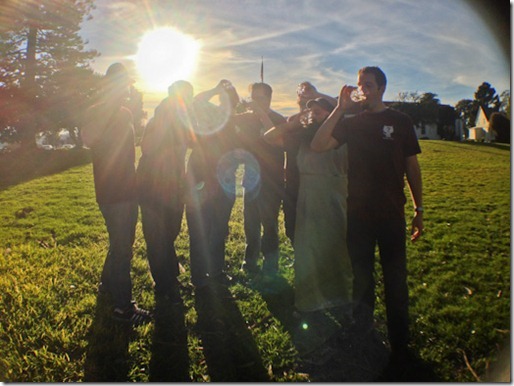 I briefly considered lobbying for extra scavenger points for having been pooped on in the line of duty. 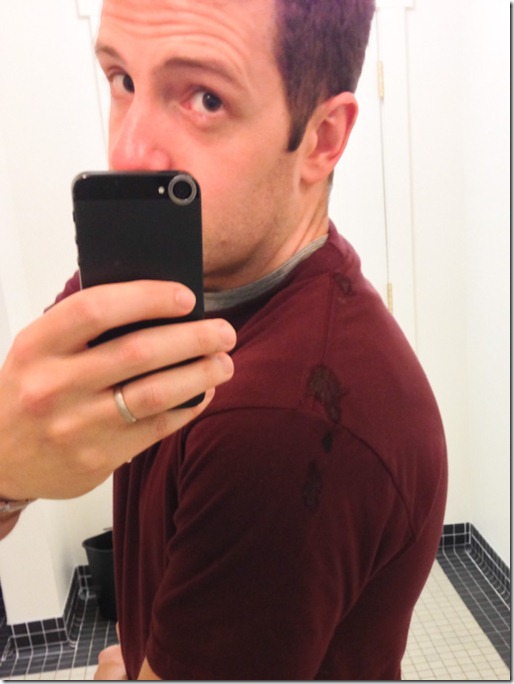 Becky thinks this photo pretty much captures the mood of the afterparty. I was doing this:

…while she was outside getting this:

The very next morning, we flew to Belgium (stay tuned).