Our train from Toronto arrived at 10pm. We hiked the half-mile to our gorgeous 8th-floor condo. Once we got settled, our stomachs shooed us out the door to find dinner. We ended up at Garde Manger, a noisy, foody spot in old town, just two blocks from our flat. We stuffed ourselves on ridiculously delicious food (which was to be a theme for us in Montreal), and strolled around the brightly lit city. 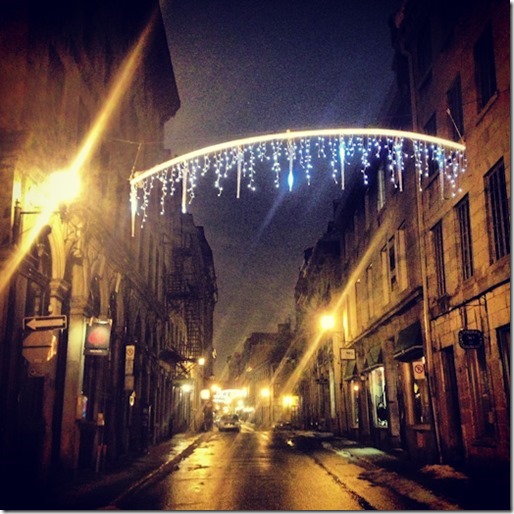 Here’s what our flat looked like in the morning: 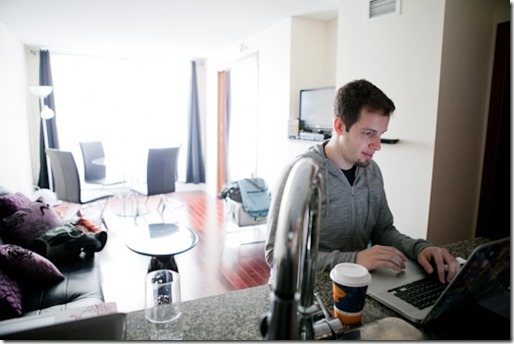 No stop in Montreal is complete without a smoked-meat sandwich at Schwartz’s Deli. Becky had been here several years ago, during the summertime, and said it was worth the sweltering wait and crowds. It turns out that the heat and crowds are much less problematic in February, and the smoked meat (don’t call it brisket or pastrami!) is worth the walk.

And if you’re in the Plateau neighborhood, you may as well see the sights. Montreal is a truly beautiful city. 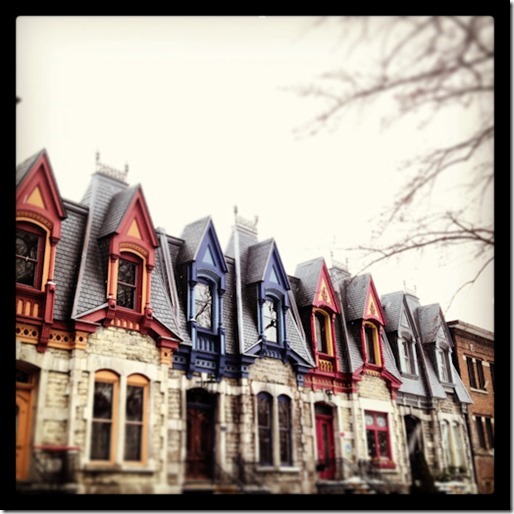 Here I am, having found a decent cup of coffee (which is surprisingly hard in this town), and sporting my courtesy-of-Delta-Airlines replacement shirt. It probably wasn’t the best choice; sort of like wearing a Red Sox shirt in NYC. 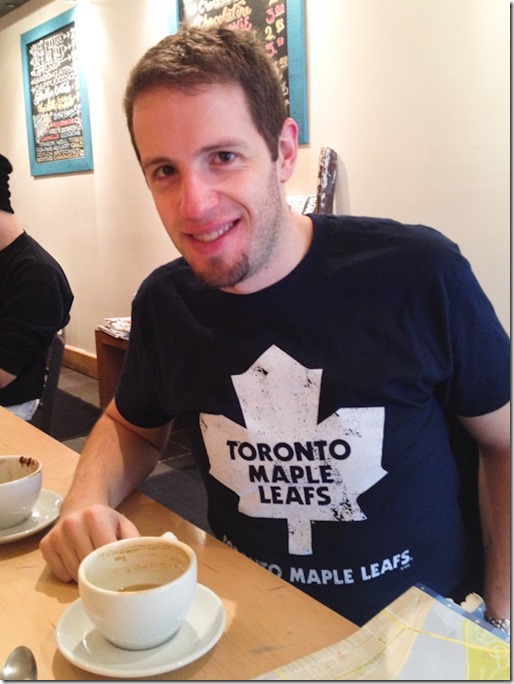 Here’s Becky, taking her 10th photo of that tree. 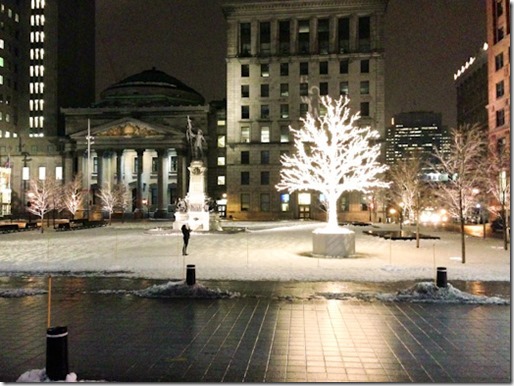 Quebec has a law stating that businesses must use French as their primary language, and there are actually language police to enforce it. We found a restaurant that was themed like a 50’s American diner, which apparently gives you a pass on the regulation.

This is the old Customs House, the center of colonial Montreal. The doors are bolted shut, the only access is from…

… the museum across the street, which had a great exhibit on the archaeological history of the city, as well as an entire floor devoted to Samurai.

We often got cold; despite having bought extra layers in Toronto, it was still blisteringly cold. 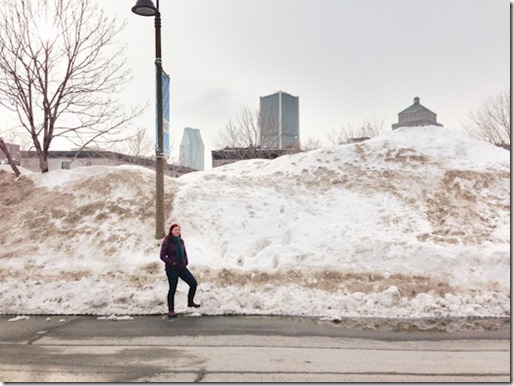 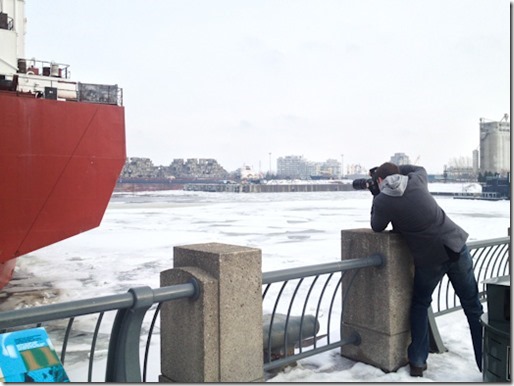 One of the reasons we came to this city was for me to speak at a conference. I managed to convince some of the exhibitors to plaster their signs with GitHub stickers: 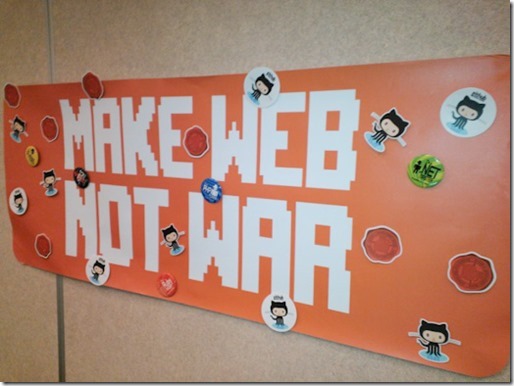 And I gave two presentations to excited audiences. One of them was to a completely full room!

Apparently I do a terrible job; there are always tons of questions afterward. 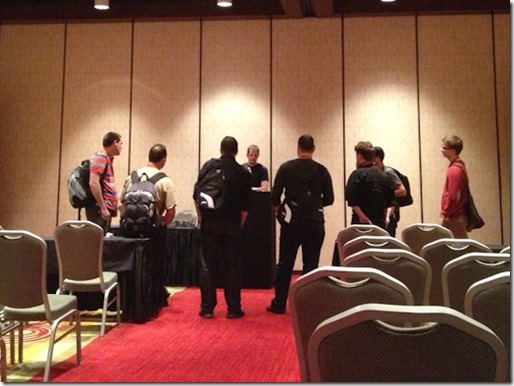 While I was conferencing, Becky strolled around snowy, freezing Montreal, all to capture amazing photos for your enjoyment. You can thank her by taking her out for a drink the next time you see her. 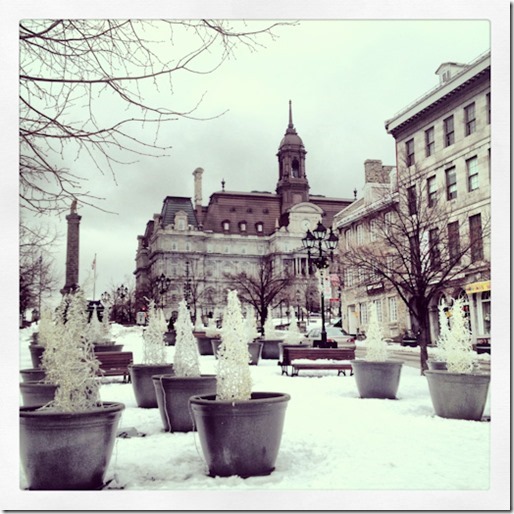 After one of the conference days, we banded together with some of the other speakers and went out for some sushi and some juggling-flaming bartenders at a fantastic bar.

On another night, all of the speakers, organizers, volunteers, and their guests went to The Pirate’s Den. Think Medieval Times but with french pirates, a bit less corniness, and better food and drink. 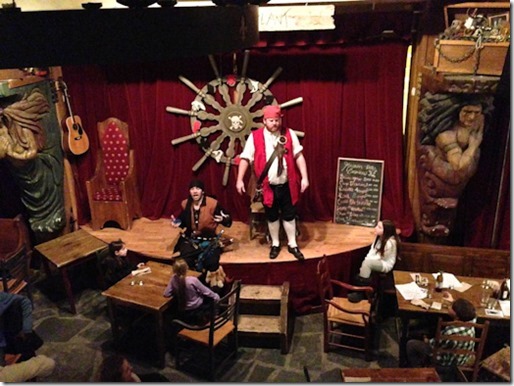 The day after the conference ended, we went with the organizers to a cabane à sucre. Think of eating lunch on a working farm, where you eat all the things that they grow. Except that this farm grows maple trees, and everything you eat is either made from or covered with real maple syrup. 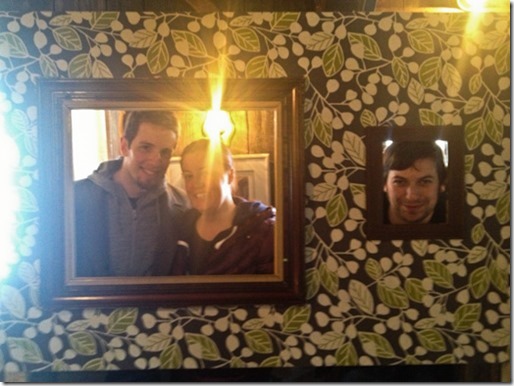 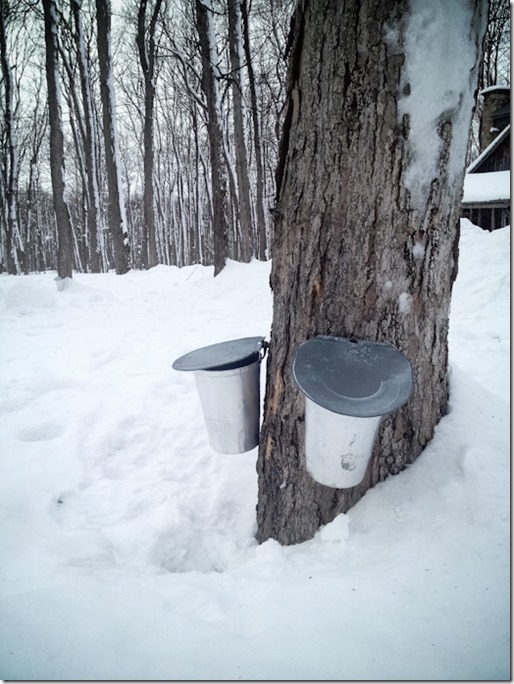 You’ll notice that just about the only condiment on the table is maple syrup. Each table gets a 750ml bottle of the stuff; it looks like that table finished theirs.

We also managed to throw a GitHub Drinkup at a place with great Belgian beer. The bartender was very nice to us, and opened a bottle of aged cherry mead for us to share with our guests.

Of course, this had to happen during Nuit Blanche, a huge light-art-music-carnival festival that Montrealers throw every winter because they’re sick of being stuck inside.

We stumbled home through the cold, brightly lit night, and collapsed for about 4 hours of sleep. Waking, packing, cabbing, eating a terrible airport breakfast, flying, laying over, flying some more, more cabbing, and finally we were home. Just in time to change clothes and go to a broadway show!

One thought on “Montreal!”