Every three months or so, Gridium has what they call “Camp.” It’s an all-hands meeting, and takes place in interesting places around (so far) the U.S. In July of 2014, it was in Chicago. 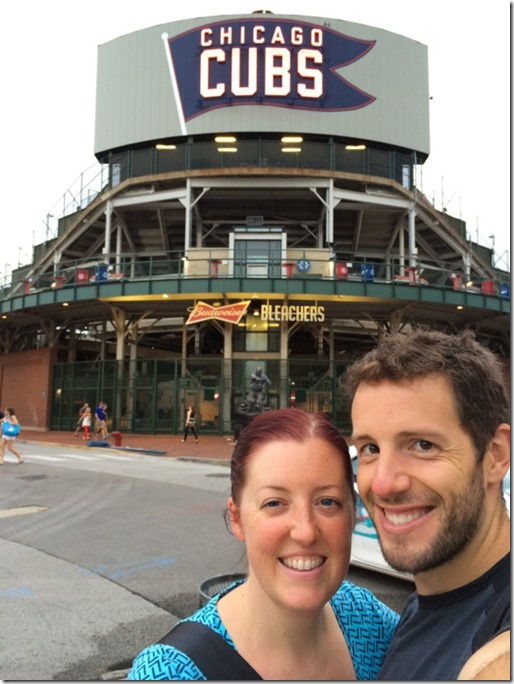 We arrived a day early, and took advantage of our time to walk around Wrigleyville. We even made it to the lake just as the cloud cover was burning off.

After that, we split up for most of the next four days.

Having purchased a 7-Day Transit Pass upon leaving the airport I was free to roam the city as I wished.  My first stop was to hit up the Museum of Contemporary Photography, which happened to be showing the exact same exhibit I had visited at the Photographer’s Gallery in London in October.

After that familiar visit I stopped for an excellent burger lunch and browsed through the free daily paper looking for something to do.  Happily I learned that the Comedy Exposition of 2014 still had one full day left! I took the train up to Logan Park and caught a couple great shows.

The second show handed me this toilet paper and straw as I walked in. 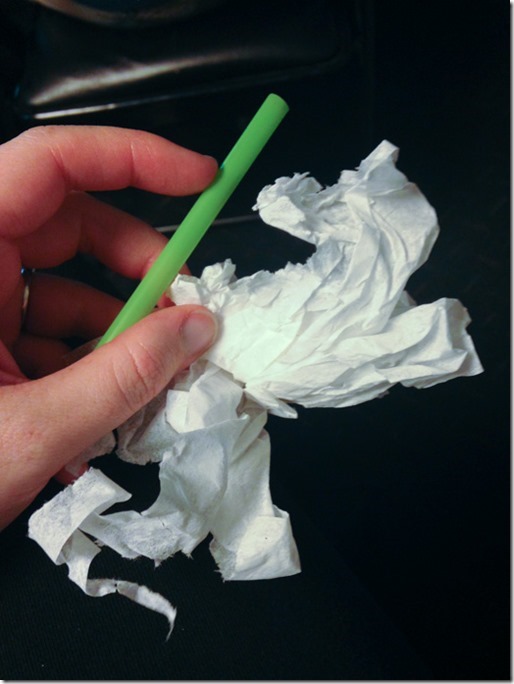 “Subs” – What would happen if the entire faculty of a high school was out sick, and the only people they could find to substitute teach were standup comedians?

This show was hilarious and the 7 comedians featured really put a lot into their characters. Below is the art teacher:

Late Monday morning I headed out once again in search of photo exhibits. First up was the “New Deal Utopias” at the City Gallery in the Historic Water Tower. 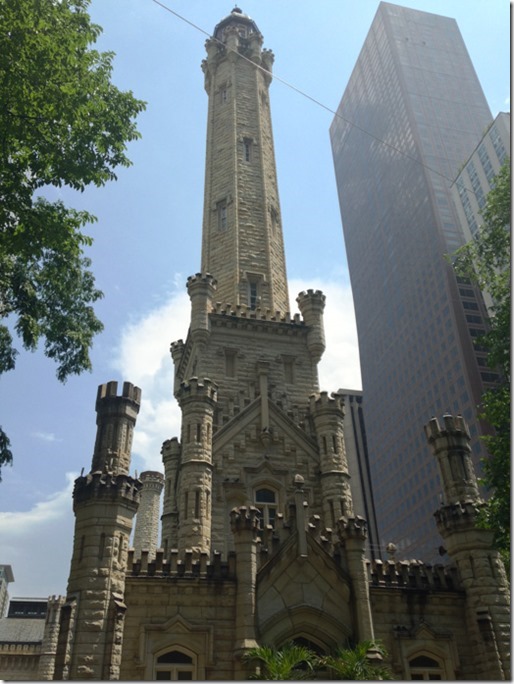 Next up: the Chicago Cultural Center for three more photo exhibits, a handful of art exhibits, and one amazing building that was formerly a library.

This photo exhibit did not impress me. It was three rooms of this: 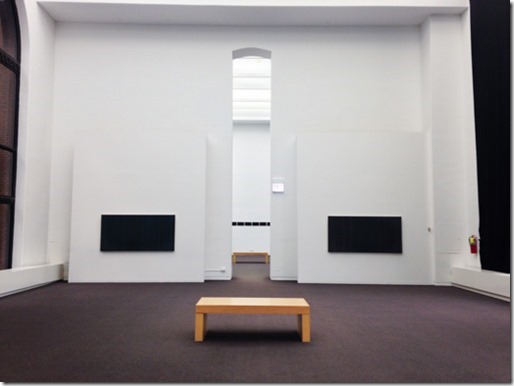 Then I crossed the street to Millennium Park to check out Cloud Gate, and all the other art that’s just sitting there for just anybody to look at. There also happened to be a history-of-Millennium-Park photography exhibit there. This was a day of photography exhibits. 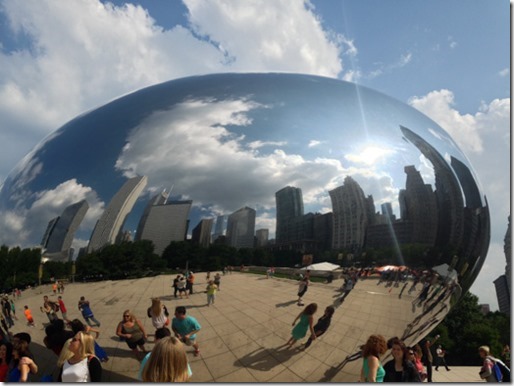 This is Daly Plaza, where this Picasso stands, and where a spontaneous Bastille Day celebration was happening. I may have eaten macaroons.

Last on the docket: a fascinating exhibit with a really interesting story. The short version: a photographer found 30 boxes of slides at a second-hand shop. No one knew who the couple in the photos were, but they were fantastic, and told a really great story. I loved this exhibit.

I criss-crossed the city by train, and walked an average of seven miles every day. It was awesome.

Meanwhile, all the Gridium-ers were having very deep and productive discussions about the direction of the company. Becky dropped in one day with a camera and her ninja invisibility skills. 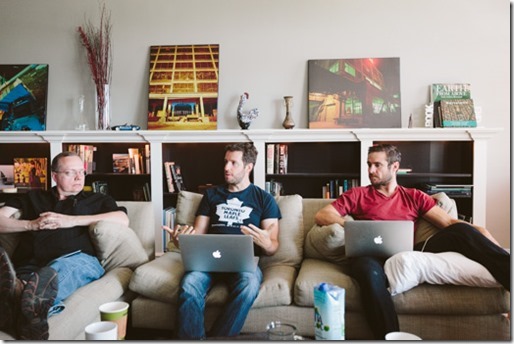 The Gridium mascot, Sugar Ray, was in attendance. 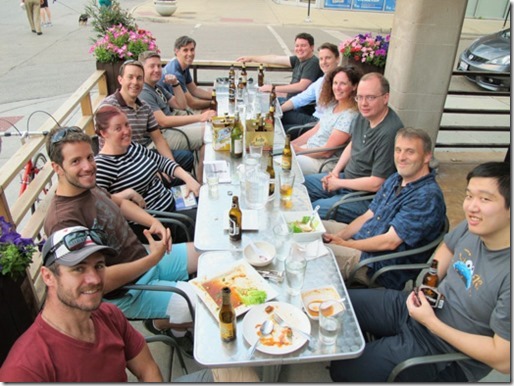 This is what happens when you find a dumbbell on the roof deck of your Airbnb after a few drinks: Ty makes you work.

Once all the business time was over, Becky and I hit the town on our own. We moved to another Airbnb closer to the city center, and headed out on a Stray Boots walking tour.

“Snap a photo under the Old Town gate”

We unfortunately couldn’t get tickets to an actual show at The Second City, but our tour had us poke our heads in.

“Look blue in front of the blue door.”

The next day we had a couple of food goals to accomplish. This place came highly recommended, and for good reason. They make a sandwich that’s uniquely Chicago, and if you’re ever here you should have one.

Then we began another Stray Boots tour. “What’s the name of the third gray pipe in the pumphouse?”

“Check out the view over the Chicago River.”

“Pose with Washington and his sidekicks”

Hey, it’s the buildings from that Wilco album.

Ben had to see the Bean too, so we retraced Becky’s steps for a while. These next three are all self-portraits. 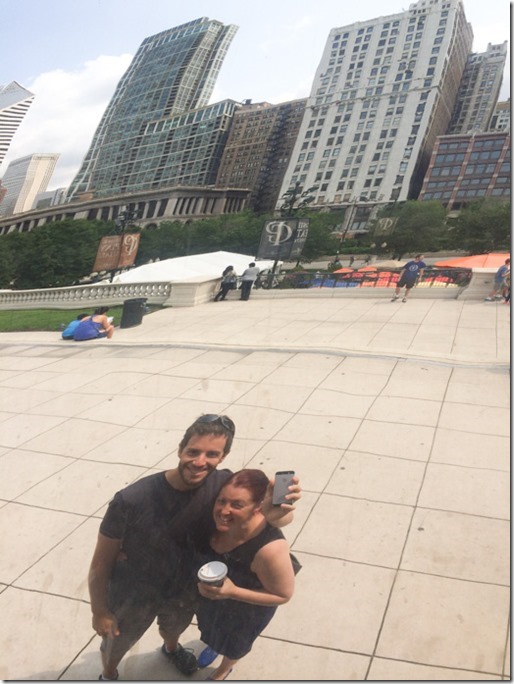 We made sure to visit Navy Pier, and feed Becky’s love of heights by riding the big ferris wheel and the swings. 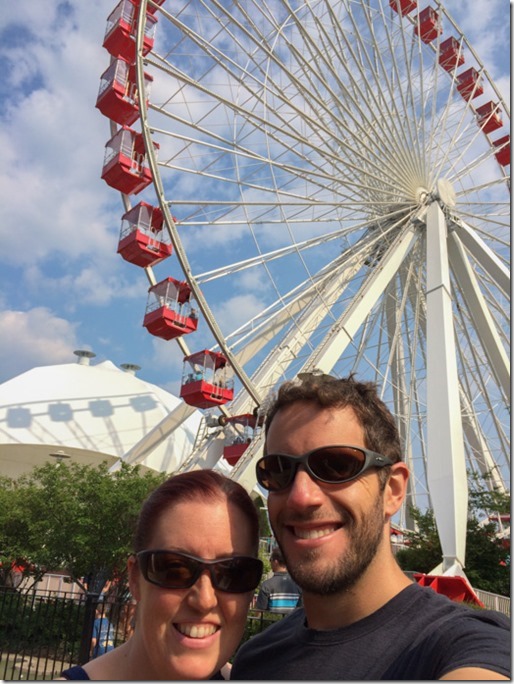 Unfortunately, Becky picked up a nasty cold while we were there, and it truly set in on our last day. We spent most of the morning at this awesome coffee shop, trying to conserve energy. Oh yeah, that’s a real DeLorean in the loft.

Chicago was good to us, and I think we were good to it. One of Gridium’s founders lives here, so we’ll most likely be back someday. We’re looking forward to it.