On our way back from Mexico, we connected flights in San Francisco. Or, rather, Becky changed flights, and I just got off. It’s time for another installment of Gridium camp!

I arrived in the bay area two days early for camp. Through my own disorganization, I had to arrange my first night’s stay at about 6pm that night, and I was fortunate enough that (a) I had a coworker who lives in the area, and (b) he had a couch I could crash on. Ray’s apartment is in SoMa, which is an area I’ve spent a fair amount of time in. 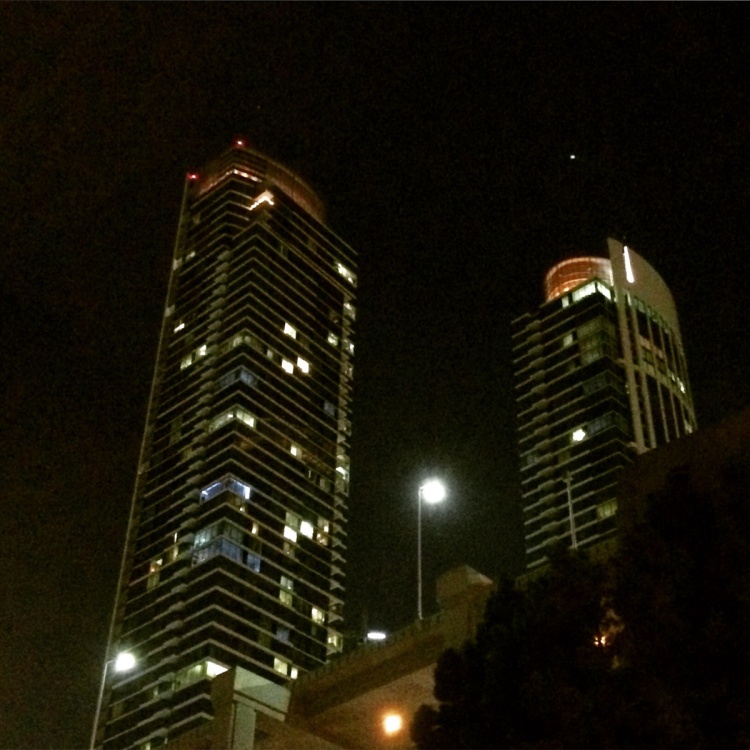 His couch was comfy, and it came with power for all my gadgets. It’s possible he keeps this couch set up for guests; there were surprisingly many blankets and pillows around. Thanks, Ray! 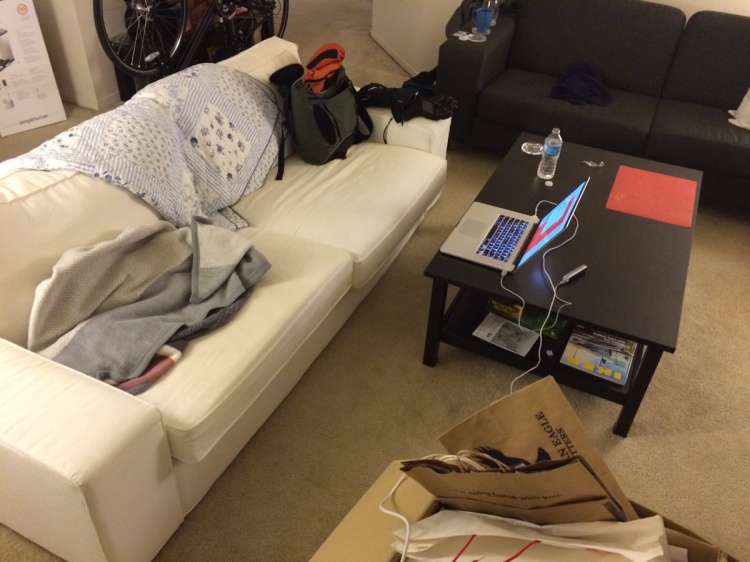 The next day I trekked over to spend time with m’verygoodfriend Melissa Severini. Her cat was very welcoming. 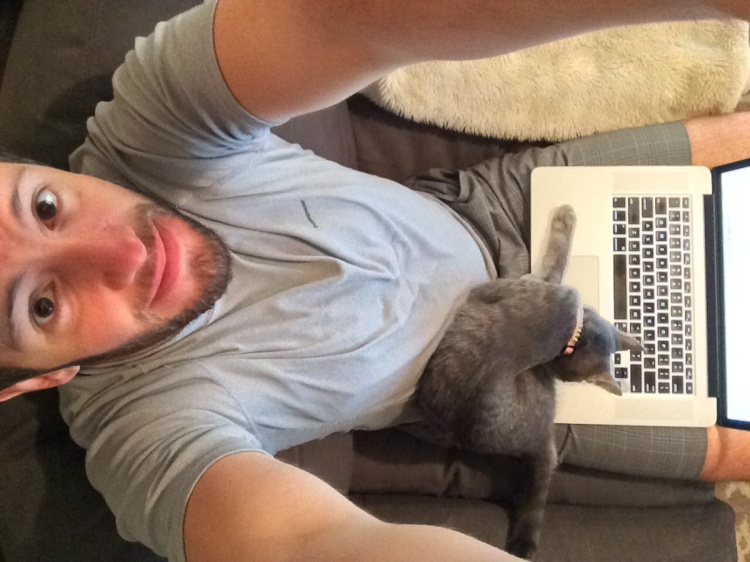 What followed was about 24 hours of sous-vide pork and lamb, sparkling conversation, and some really good brunch, during which time I at no point pulled out my phone to take a photo. I guess you had to be there. Anyways, I crashed on her couch, too.

Since it was now 2015, we had started running a mile every day as one of our 100 Things. This was my view during one of those runs.

The next day, some of the SF-local Gridium-ites (we don’t really have a good demonym) picked me up from Melissa’s house, and we took the scenic route down Highway 1 towards Santa Cruz. This coffee shop we stopped at had the most amazing collection of kitsch I’ve ever seen, and I’ve seen some.

Finally we arrived at our rental houses in Santa Cruz. They were a 2-minute walk from the ocean, and since most of us live in non-coastal states, we had to spend our first evening on the beach.

We returned to the house for a big crab dinner. 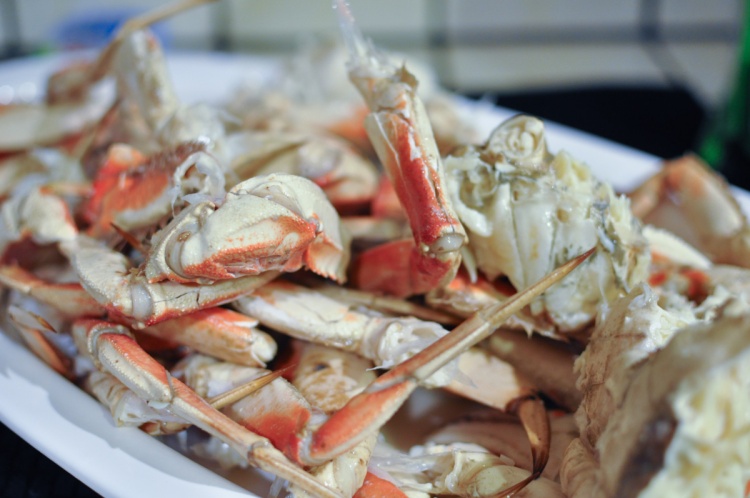 After which we gave lightning talks. David‘s was on fantasy football, and apparently he’s pretty good.

Then a surprise! David and his wife are expecting their first child soon, and Kimberly put together a baby shower!

Some of the gifts were for grownups.

The next couple of days were a whirlwind. We did some product planning, lots of stregery, and syllogized synchronous synergies. 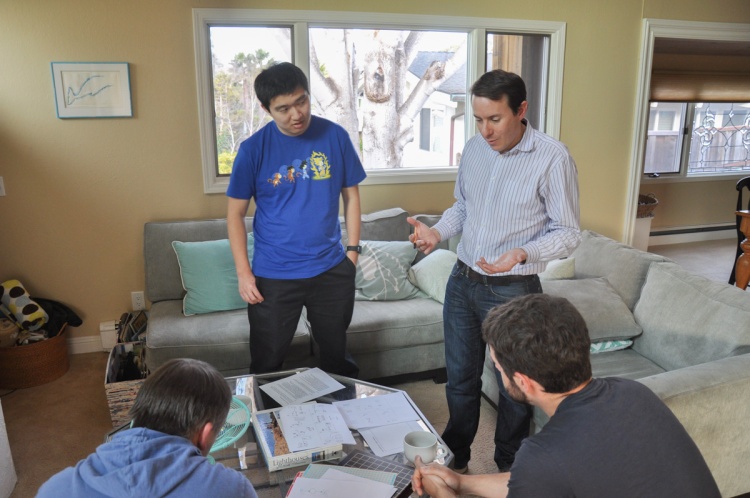 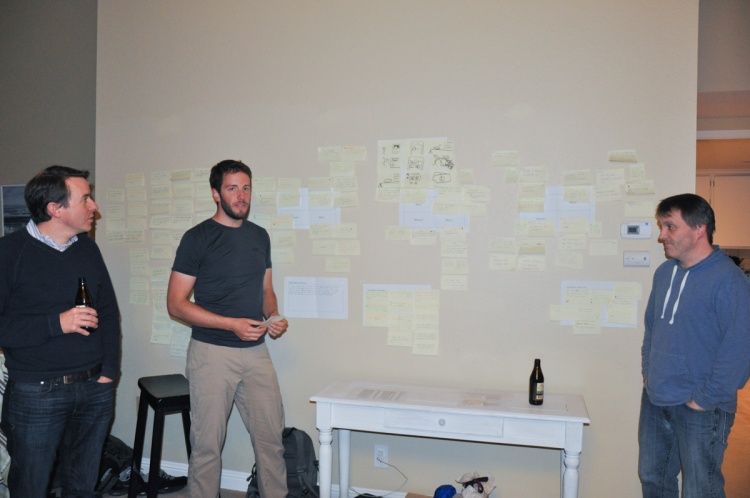 And I learned how to play Go. Or at least how to start playing Go. 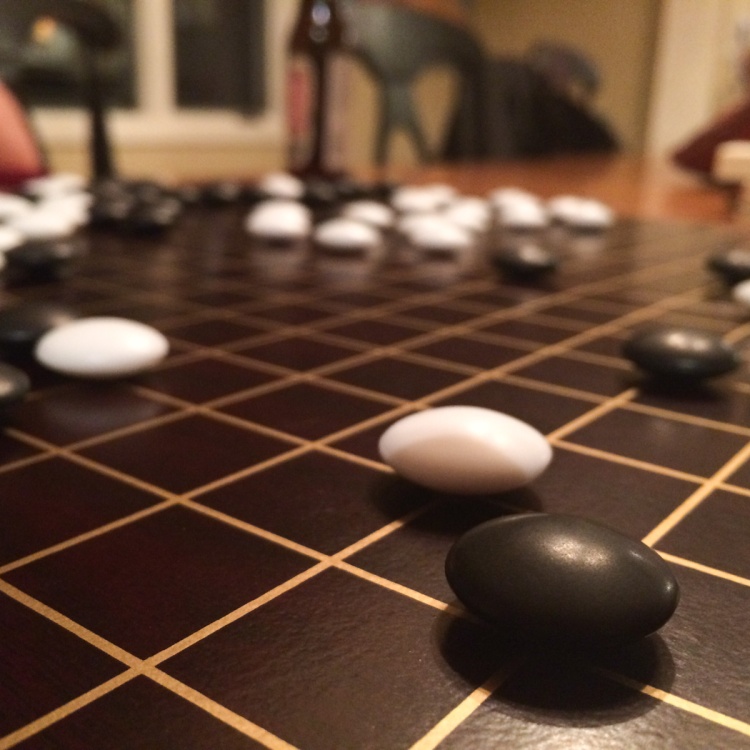 Another surprise reveal: we launched a new HR program called high fives, which is a way of telling our chat robot to send people Amazon gift cards, and which I wrote in secret in the weeks leading up to this. 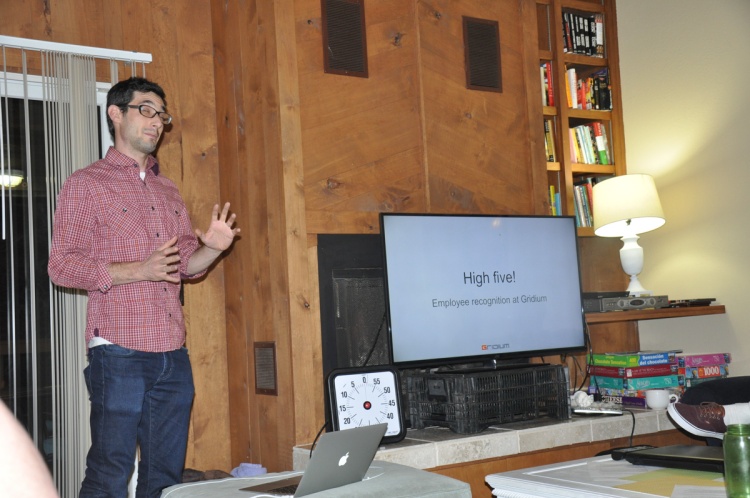 No trip to Santa Cruz is complete without an evening at the local dive bar. 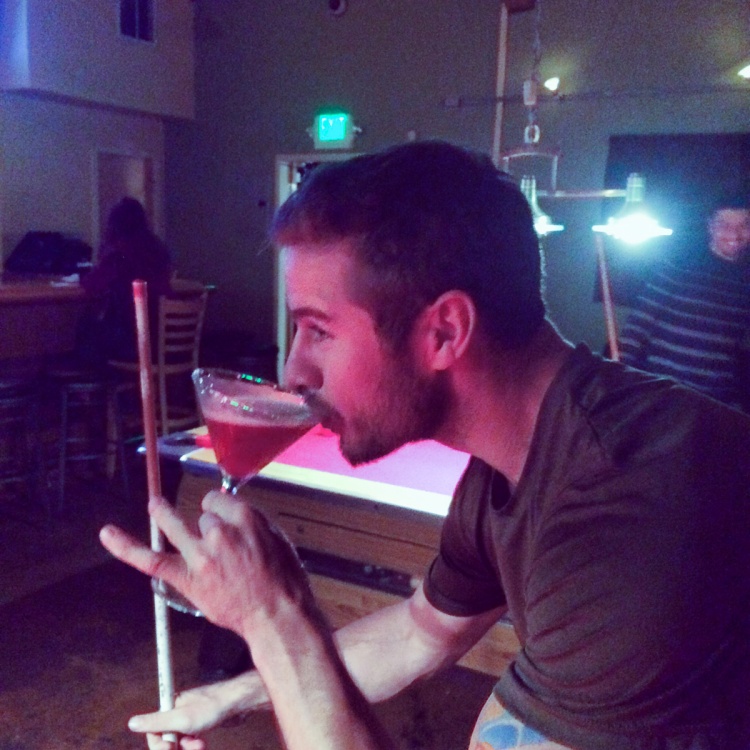 …and the requisite recovery period. 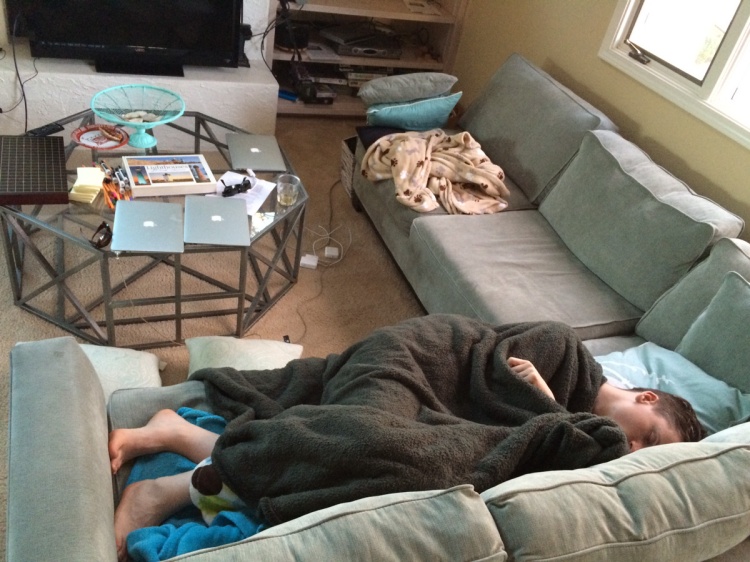 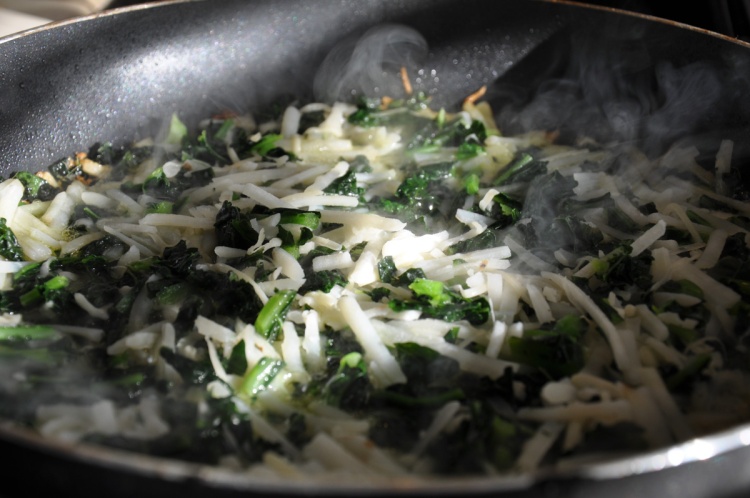 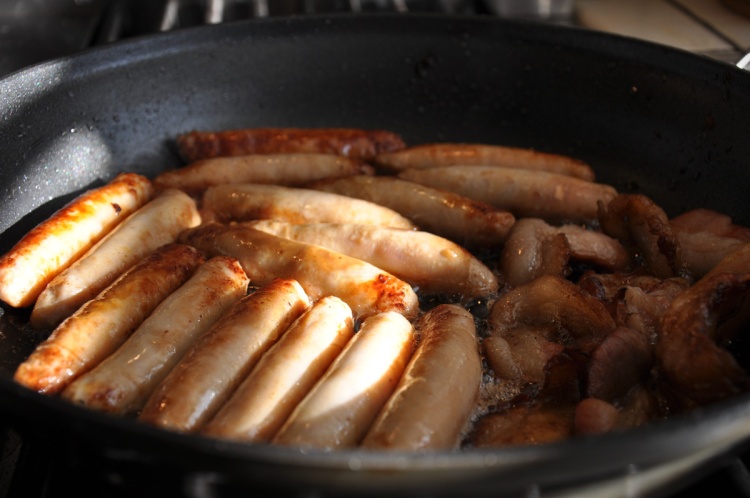 Skateboarding happened. I learned exactly how terrible I am at this, and how unpredictably multi-talented my coworkers are. 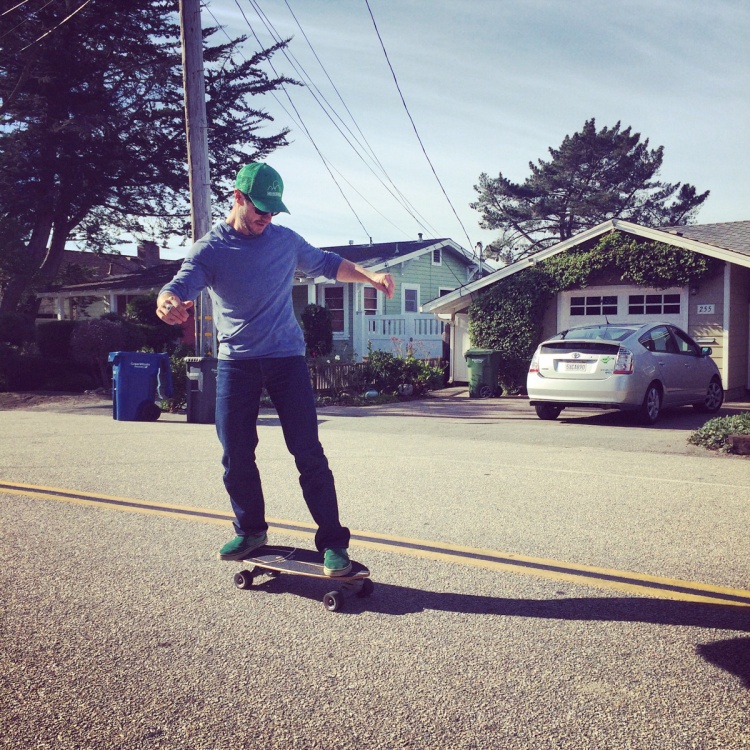 Gridium celebrates the holidays by giving out gifts to employees, and they’re very generous with them. I received this most hipstery of coffee-brewing devices, and enjoyed delicious coffee the rest of my days.

I was still running a mile every morning, but my cooldown view had changed a bit.

Camp is pretty short at three days; my other experience with this kind of all-hands summit was GitHub’s week-long extravaganza, so these always seem to end too soon. Fortunately, there will be another one in just three months!