The kids finally outgrew their Ikea beds, and we wanted to give them a bit more individuality in their rooms. So back in February, they got new beds, ones which hopefully will last them until they’re teenagers, if not longer.

Lucy ended up choosing a fairytale-style frame from Amazon, while Will got a solid, gray slab from Pottery Barn (on clearance). We got flat-pack box springs from Amazon, sheets from Target, and their old comforters made by Grandma Kay (the Princess Peach masterpiece) and Grandma Dorothy (made out of Margaret’s T-shirts). 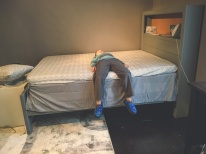 (Incidentally, the Margaret-shirt quilt is the one Will took with him to Sandhill.)

This seems like a simple thing, but it was the first major furniture purchase they each took part in on their own. We didn’t choose them as a group, they didn’t confer, they both made their own choice. Will and Lucy are both proud of the spaces they’re making their own.