It feels like this took all year, but in reality I didn’t even take it out of the package until June. The problem was that I was intimidated by the seeming enormity of the process.

When Lucy chose this stocking kit, I was really intimidated. There was just so much I wasn’t sure how to do, so I kept putting it off. I finally took it out of the package in the summer, cut out a couple of pieces, and got intimidated all over again, and I didn’t really get started working on it until a couple of months ago. I was right to be scared though: there’s a huge learning curve to doing this, and so many fiddly bits. 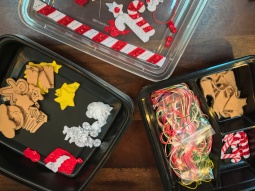 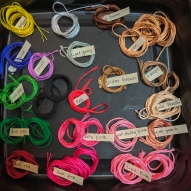 I’m pretty pleased with the outcome, though. I vaguely followed the directions, but some of them were needlessly overcomplicated, and some of the steps were just in the wrong order. If you look closely, you’ll notice that this is just the front panel of the finished stocking; I’m saving the actual container part until I have the other three front panels complete.

So this was terrifying, and I wasn’t sure I’d like it or be good at it, but in the end it was really satisfying. The next three should go much quicker. It’s the perfect 100 Thing.