This is a continuation of our Ireland hike; check out parts one, two, and three.

This is part of our 100 Things in 2017 challenge. Here’s the full list. Click on the photos for a closer look!

Our planning session turns out to have been perfectly timed; the view out the window during breakfast is pretty dire. (Actually, we’re not sure if there was a communication breakdown or our host thought we weren’t eating enough, but we were served three breakfasts this day.) Today would ordinarily be a challenging day of hiking for us, and with that weather, well, let’s just say we’ve learned our lesson.

So we skip the cable car and Dursey Island, both of which would have been high points of the trip during nicer weather, and instead take our pre-paid cab ride back to Castletownbere. We’re packed into a 9-passenger van with other holiday hikers (including the Dutch couple we met yesterday!), most of which are doing exactly what we’re doing. After a harrowing ride at high speed on narrow roads, we are dropped off at our next night’s lodging around 10am, and the host is confused and surprised, but kind enough to let us stow our bags on short notice.

It’s much too early to check in, so we don our rain gear and set off for our destination for today: the grounds of old Dunboy Castle, the old seat of the O’Sullivan Bere clan (which is the source of many of the place names around here: Bere Island, Castletownbere, the Beara Peninsula, etc.). It’s about a mile on a semi-narrow road to the entrance gates, which are quite impressive. We followed the entrance road, and spotted a horse that was tangled in a wire fence. It took about 10 minutes to rescue the poor guy. Turns out horses are heavy. 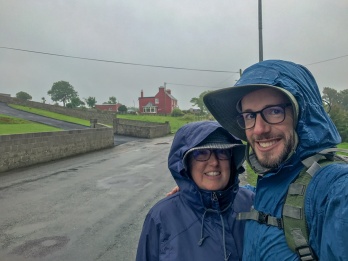 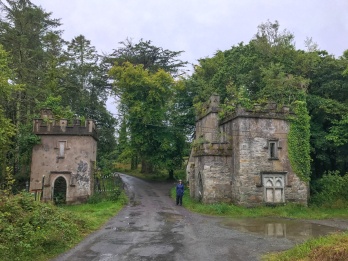 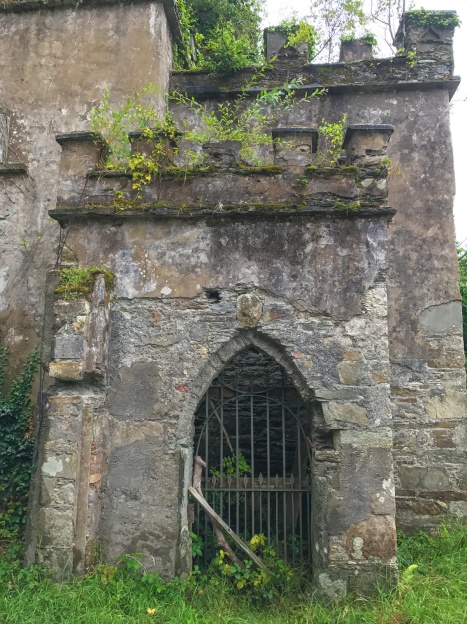 Not long after, we spot our second ruin of the day. This is storied Puxley Mansion, built on land that Cromwell gifted the Puxleys after crushing Irish resistance in the Nine Years’ War. It was built into quite an estate during the copper mining boom, and then abandoned when tragedy struck the family and the copper dried up. It was burned to the ground by the IRA in 1921, and sat there growing moss for nearly a hundred years until a development company tried to turn it into a seven-star hotel. Then the 2008 crash hit, and it was abandoned once again. It’s thought to be cursed. 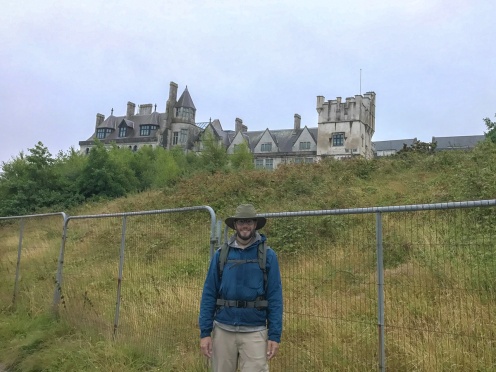 Tucked behind it is the even older ruin of Dunboy Castle itself, seat of the O’Sullivan Bere clan for generations. It’s little more than a squarish arrangement of grassy piles of rocks now, but there are plaques commemorating the 1602 siege where the English crushed the defending forces of Donal Cam O’Sullivan Bere. It is a sad place. 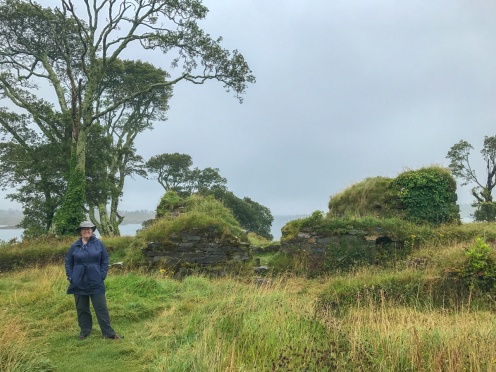 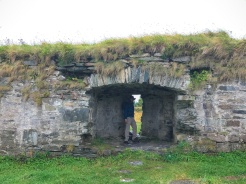 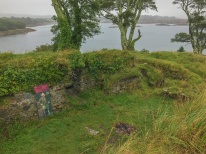 After that we high-tailed it back to town. We hadn’t packed a lunch today, knowing that we had already done most of the hiking around this area, and we had planned on spending the second half of the day in town. We went straight to The Tea Room, and it was just the thing. Hot, tasty tea, a bathroom, and lots of munchies for our empty stomachs.

We spent some time just strolling around the town center, made a quick stop at the Sarah Walker Gallery, and spotted a photography exhibit, with amazing portraits of town locals. Truly striking. 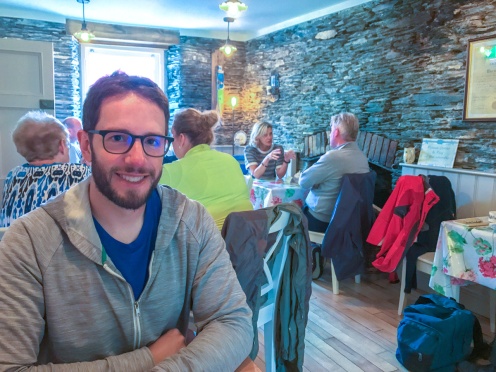 We made our way back to our B&B to finalize our checkin, drink some more tea, and arrange our transport back to Dublin the next day. We ambled back into town around 5 for supper, fantastic chowder at Murphy’s. Oh, and we absolutely had to stop in for a pint at McCarthy’s Bar, which is famous for being on the cover of McCarthy’s Bar (a book about bars named McCarthy’s, and no, I’m not making this up). It’s about the most quintessentially Irish pub I’ve ever had the pleasure of drinking in. Highly recommended. We managed to watch a single episode of competitive baking TV before collapsing.

We rose early to eat breakfast and catch our “bus” (really just a big van) back to Cork. Becky is not given to bathroom emergencies, but she had to pee so bad that she asked the driver to stop about halfway there. He was very put out and unkind, and didn’t stop until we were 5 minutes from the Cork train station. Sheesh.

We had just enough time to buy tickets and hop on a train for Dublin. We weren’t so sleepy this time, and we were ready to explore by the time we got there. It turns out that Dublin’s train station stopped having luggage lockers a few years back, so the “official” way to stow your luggage for a few hours is to pay a local hostel (a 5 minute hike from the station) to look out for them. Unburdened, we set out to find out what Dublin is all about.

What we found was EPIC, a museum about the influence that Irish emigration has had on global culture. Ireland has a long history of being subjugated, to the point that many of its citizens decided to try their luck elsewhere. There’s a pretty good chance that you, dear reader, have some Irish ancestry. The museum is incredibly well done, and a joy to walk through.

We stopped for some pie and pints at a local pub, and tried out the claim we’ve heard that Guinness tastes different if it’s pulled within 10 miles of the brewery. We honestly couldn’t tell, but it hit the spot. After that we walked through Trinity College and the grounds of Dublin Castle, enjoying the sights and the people of the city. It really is a lovely place. 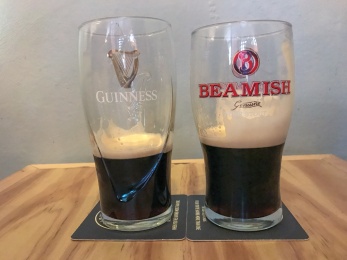 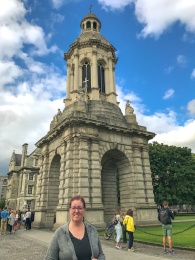 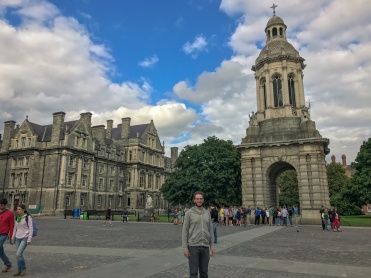 We managed to get a hotel room close to the airport, since our flight was early the next morning. We fetched our luggage and hailed a cab driver, who loved to talk about anything and everything. Upon reaching our airport hotel, we stopped being inspired to take photos. The exciting part of the journey was all behind us, and everything we were doing just seemed so pedestrian. We hopped on a plane the next morning, and spent 14 hours watching movies, and then tried to stay awake until bedtime PST.

Thus endeth the tale of our expedition to rural Ireland.