Theater was something Becky has been doing since childhood, and I was involved as a teenager, so we love to see our kids try out the performing arts.

One of the things you do as an older kid at Lucy’s school is sort of a capstone project – something of your own choosing, but kind of big. Several of the kids got together and decided to put on a school play. And then it turned into several plays, with filmed commercials in between.

Lucy auditioned, and landed the lead part in the 20-minute-long  “5-minute mystery!” Her “episode” was written collaboratively by the cast, and went through several major revisions. She helped design her costume, built some of the sets (with help from Will!), and really had a ton of fun with the whole process. 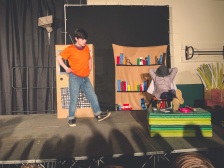 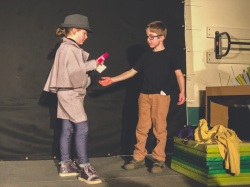 The play had some other interesting elements as well. First of all, the actors didn’t actually speak their lines, they lip-synched with their voice actor (another student), and had to coordinate pretty tightly. Since this was a collaborative, student-led production, there was even lots of educational behind-the-scenes drama to navigate.

Lucy had an absolute blast, and is looking forward to her next opportunity to perform on stage. Oh, and she caught the thief.